Dancing Pandas of CART will compete for the World Championship

by aaronlove
Comments are off 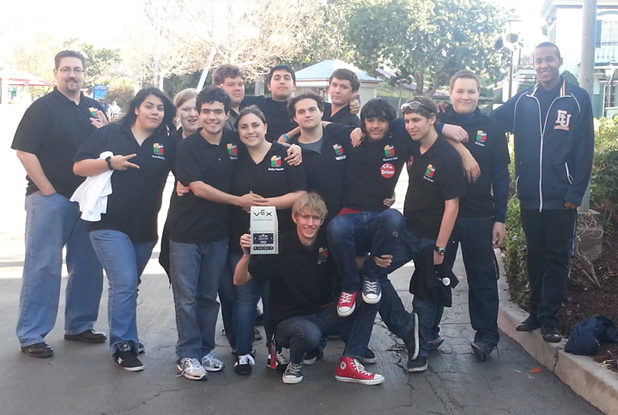 The Vex Robotics Team 1424 (The Dancing Pandas) is an extracurricular team formed from students enrolled in the ROP Robotics Laboratory at CART coached by instructor, Brian Emerson. The team, sponsored by GRUNDFOS, consists of twelve high school juniors and seniors from seven different schools in Clovis and Fresno Unified School Districts. The Dancing Pandas entered three robotics competitions in 2013 and qualified for the finals in each, even claiming the Tournament Champion trophy at the Central Coast Vex Competition in February. That win earned them a spot at the first annual California State Vex Championships in Santa Clara California where they went on to the win the “Create Award” for best overall robot design in the state. Thinking their amazing season was over; the team then received an invitation to participate in the Vex Robotics World Championship event this month in Anaheim California. There will be over 425 teams from all over the world including the United Kingdom, China, Mexico, and Japan. The Dancing Pandas of CART will be the only team representing the entire Central Valley at the “Olympics” of Vex Robotics.

This Week At CART - Ethan Maldonado

This Week At CART - Lucy Yang

This Week At CART – Andrea Granados

The Center for Advanced Research and Technology